Public School Review Diversity Report: Which States Have the Most Diverse Public Schools?

by Grace Chen
Which states have the most diverse public schools? We analyze our data to find how much diversity truly exists on public school campuses. Learn about the varying levels of school diversity in regions around the nation, as well as the benefits derived from ethnic diversity in schools.
American public schools have made tremendous progress since the Supreme Court declared school segregation unconstitutional in Brown v. Board of Education. Schools throughout the nation are more diverse than ever before as a result of desegregation, immigration of people to this country, and emigration of citizens from one region of the nation to another. Sixty years after the Supreme Court’s decision, schools in Alabama, Mississippi, Georgia and other southern states where segregation was once so prominent have shown great gains in diversity.
But which states have the most diverse public school campuses? We collected data and analyzed the numbers to develop an original list illustrating how much diversity truly exists in each state’s public schools.
Diversity Scores of Public Schools
To equally compare the diversity of public schools in our country, we mined student population data and calculated diversity scores at the school, town, county and state levels.
While “diversity” commonly refers to the presence of minorities, we were interested in understanding the presence of more than one ethnic group on campus. For example, while the Los Angeles Unified School District has many schools that have 90% or more Hispanic students on campus, this would be considered a homogenous school, rather than a diverse one.
As such, our formula determines the likelihood that any two students are from different ethnic groups.  Scores closer to 1 indicate greater diversity, while scores closer to 0 indicate lesser diversity.
When examining the various levels of scoring, school-level scores are more or less indicative of the town, county and state-level scores, meaning states with a greater level of diversity also have schools with a greater level of diversity.
There are, of course, exceptions to the rule.  Our data analysis takes the average across all of the schools, but there are always outliers. 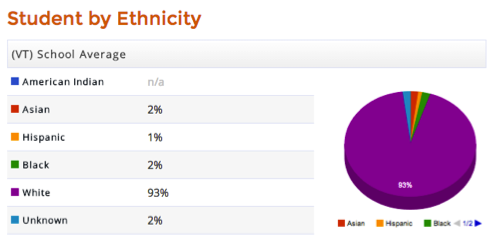