Updated January 25, 2019 | by Grace Chen
Learn about sex education in public schools and the ongoing debate about federal support.
According to statistics compiled by the Guttmacher Institute, the US has “one of the highest teen pregnancy rates in the developed world—almost twice as high as those of England, Wales and Canada, and eight times as high as those of the Netherlands and Japan.” Because of the rising pregnancy rates among teens, in addition to the rising rates of sexual activity among teens, both parents and public schools are exploring the best sex education programs to benefit students.
While sex education has historically brought forth great tension and debate between schools and communities, National Public Radio asserts that “providing effective sex education can seem daunting because it means tackling potentially sensitive issues. However, because sex education comprises many individual activities, which take place across a wide range of settings and periods of time, there are lots of opportunities to contribute.”
The Debate of Sex Education in Public Schools
While some Americans express mixed opinions on how public schools should teach sex education courses, National Public Radio (NPR) reports that the once heated debate over whether or not schools should even teach teens about sex has now dwindled: “A new poll by NPR, the Kaiser Family Foundation, and Harvard's Kennedy School of Government finds that only 7 percent of Americans say sex education should not be taught in schools. Moreover, in most places there is even little debate about what kind of sex education should be taught, although there are still pockets of controversy.”
According to NPR, debates between schools and parents has dwindled, as more community members are becoming both informed and involved in the discussion of sex education in schools: today, surveys reveal there is “little serious conflict over sex education in their communities nowadays. Nearly three-quarters of the principals (74 percent) say there have been no recent discussions or debate in PTA, school board or other public meetings about what to teach in sex ed. Likewise, few principals report being contacted by elected officials.”
Sex Education Involvement Seen Nationwide
The National Conference of State Legislatures reported that as of January 1, 2014, every state in the U.S. was involved in some type of sex education. Nearly half of all states and the District of Columbia mandate some sort of sex education class in schools. Most of those also require HIV education with their sex education. Nineteen states also require schools to teach information that is “medically accurate,” although definitions of “medically accurate” can vary from state to state.
Parents also have rights in most states when it comes to the sex education of their children. Thirty-seven states allow parents to be involved in the sexual education instruction and 35 allow parents to opt their children out of the sex education classes in the schools. Three states require parental consent before the schools can teach sex education.
What are Teens Learning in Public Schools? 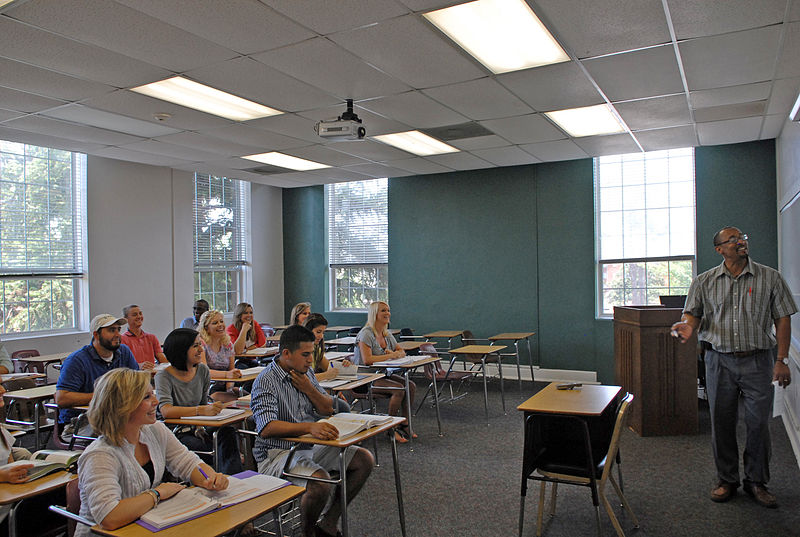 Photo by Abac college (Own work) [CC-BY-SA-3.0], via Wikimedia Commons
Sex Education and the Federal Government
According to NPR, while the majority of Americans agree that teens should learn about sex in public schools, many individuals are conflicted on the methods of teaching, as 15% of Americans argue that schools should only teach abstinence from sexual intercourse, while further asserting that schools should not provide information on how to obtain and use various modes of contraception.
Added to this, however, approximately 46% of Americans believe that both abstinence and contraception should be taught in schools. The organization Advocates for Youth agrees that effective sex education should incorporate a number of essential components, including:
To navigate this issue of teaching students to make the best decisions, the Heritage Foundation asserts that the federal government’s new regulation of funds, allocated to sex education in schools and communities, can provide individuals with more opportunities to become informed about good decisions and safety.
As The Heritage Foundation explains, “government-funded contraceptive programs promote the use of contraception for two purposes: to prevent unwanted pregnancy and to reduce the risk of infection by sexually transmitted diseases (STDs). To meet these goals, government contraceptive programs may provide contraceptive services, promote and encourage contraceptive use, or both.” As government funding is increasing for sex education and programs for teens, federal support is aimed at the goal of fostering safe sex and comprehensive programs based on lessons abstinence, protection, and prevention.
Revised Programs and Opportunities for Support
As social norms among teens shift, communities are finding new ways to proactively educate teens on sex education issues. As NPR explains, “Because sex education can take place across a wide range of settings, there are lots of opportunities to contribute.” 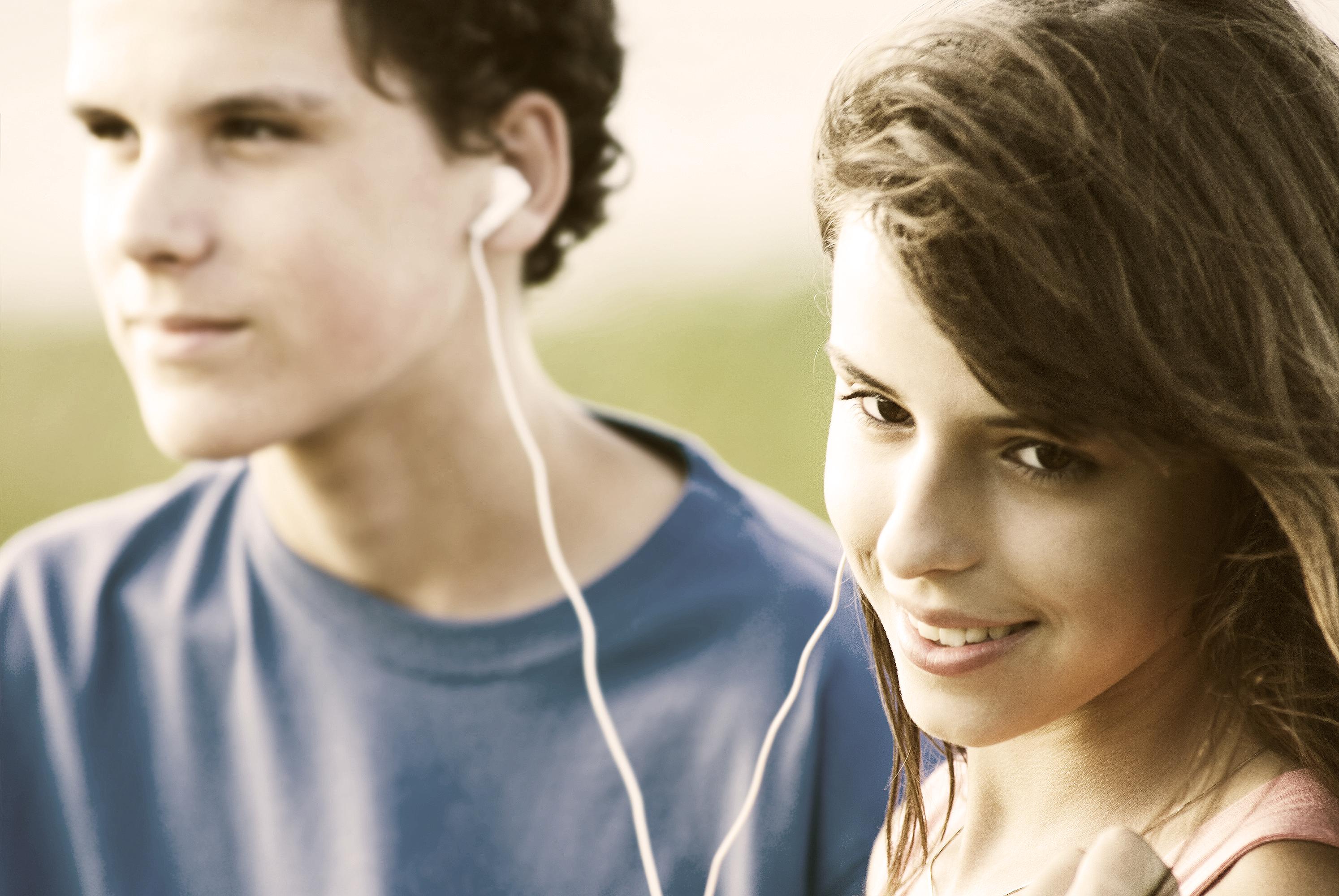 Photo via Wikipedia Commons
Foremost, parental involvement is considered to be the best resource for students to receive ongoing individual support and information early in their lives. Added to this, “school-based education programs are particularly good at providing information and opportunities for skills development and attitude clarification in more formal ways, through lessons within a curriculum.”
Yet parents and schools do not have to bear the brunt of continuing the discussion with teens: “Community-based projects provide opportunities for young people to access advice and information in less formal ways. Sexual health and other health and welfare services can provide access to specific information, support and advice. Sex education through the mass media, often supported by local, regional or national Government and non-governmental agencies and departments, can help to raise public awareness of sex health issues.” As NPR further explains, in bringing together and joining thee separate elements, teens can be provided with an ongoing coherency in their overall education—and specifically in the realm of sexual education.
Specific Parental Involvement Strategies
Since parents have the longest and most on-going influence on a child’s life, parents can be involved in the decision making processes of schools by meeting with teachers, attending open-forum school board meetings, and by being involved in parent programs like the PTA/PTSA.
As Avert, a program dedicated to education both teens and adults about safe sex, supports, “The most effective sex education acknowledges the different contributions each setting can make. Schools programs which involve parents, notifying them what is being taught and when, can support the initiation of dialogue at home. Parents and schools both need to engage with young people about the messages that they get from the media, and give them opportunities for discussion.”
Parents can find out about their school and community’s specific sex education program by checking their community’s individual curriculum standards, available for all individuals online. Paired with this, schools often send home rubrics and information on the content of courses; as such, parents can monitor their child’s classroom content by using such resources as opportunities to become more informed and involved in their child’s learning process.
The Debate Continues
Despite the general consensus that sex education should be a part of the high school curriculum, the debate over how and how much continues in school districts across the country. Some of the conflicts currently raging include:
Parents are speaking out against sex education programs in Iredell-Statesville schools in North Carolina. The Mooresville Tribune reports the primary point of contention is a class that teaches students to place a condom on a wooden prop at the end of the session.
A poster displayed at a Kansas middle school that teaches abstinence is raising the ire of parents. The poster lists a number of ways people express their sexual feelings, including grinding, oral sex and anal sex. The Daily News reports parents of 13-year-old students want the poster taken down.
In Tempe, Arizona, a heated debate is going on between Planned Parenthood representatives and parents of school children. The organization is advocating for a say in the sex education program at public schools, but many parents want Planned Parenthood out of the picture, AZFamily.com reports.
With many strong values and opinions on both sides of the sex education issue, it is certain the debate over what children should be taught will continue. Parents can play a role in their children’s sex education by broaching the subject at home and remaining abreast of what the local school is currently teaching.

What You Need to Know About Public Schools in a Recession
Recent Articles
May 22, 2020
Charlotte-Mecklenburg Offers A Middle College High School
Learn more about Cato Middle College High, a school that allows students to get a head start on college courses while still in high school.
May 22, 2020
A History of Public Schools
Public schools in the United States have an interesting history. Learn about how these public institutions developed into a cornerstone of our country's education.
March 27, 2020
Tips to Maintain Your Child’s Education During School Closures
Schools all over the country have closed their doors to slow the spread of COVID-19, forcing educators and parents to switch to online learning strategies. Read on to learn where to start with homeschooling and for helpful resources for learning at home.
Most Popular Articles
Top Ranked Public Schools in the US
10 Major Challenges Facing Public Schools
Uniforms: The Pros and Cons
How Does Bullying Affect a Student’s Academic Performance?
The Pros and Cons of Tracking in Schools