Understanding No Child Left Behind 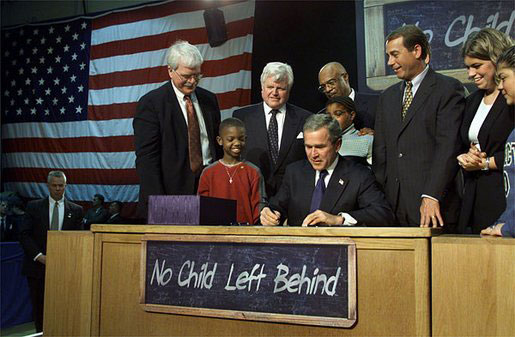 Photo by Executive Office of the President of the United States, [Public domain], via Wikipedia Commons
No Child Left Behind is a bipartisan effort. The act passed with support from democrats and republicans alike and a bipartisan commission was created in 2006 to review No Child Left Behind, its promises and its problems. This commission provided Congress with recommendations prior to the renewal of No Child Left Behind in 2007. Unfortunately, NCLB has ground to a halt since that time, as lawmakers have been unable to agree on precisely how to reform the federal mandate.
The No Child Left Behind Mandate.
No Child Left Behind mandates that all teachers must be "highly qualified" by the end of the 2005/2006 school year. According to the law, "highly qualified" means that a teacher must meet the license and certification requirements of the state in which they teach. A teacher must also hold at least a bachelor's degree and must pass state testing criteria to be eligible to teach beyond the 2005/2006 school year.
If a teacher did not meet any of these qualifications by the end of the 2005/2006 school year, they will not be allowed to teach again until they do meet these mandatory requirements.
No Child Left Behind also mandates that all students in a school must be "proficient" by the 2013/2014 school year. Each state will determine its own standards of "proficiency" for the students in that state. If, at that point, a school repeatedly produces students who are not proficient in their studies, the students at that school will have additional assistance programs available to them, such as the ability to attend one of at least two other schools in their district.
The longer a school fails to meet the No Child Left Behind criteria, the more assistance will be made available to parents and students in that school's district. These schools will also face additional disciplinary measures, including, but not limited to, state takeover.
What Does No Child Left Behind Do?
According to the U.S. Department of Education, No Child Left Behind was designed to provide school districts with more funding in the form of No Child Left Behind bonuses, as long as those schools are achieving the standards set by No Child Left Behind. No Child Left Behind will also allow states and school districts more flexibility in the use of their resources, hold school districts and individual schools accountable for their results, give parents "report cards" grading the schools in their school districts so they can see which schools in their neighborhoods are succeeding, provide extra help with learning, offer school choice and encourage parental involvement.
If schools that are found lacking fail to improve each and every year between now and 2007, a school improvement plan will be implemented. If the school still fails to improve after such a plan has been implemented, the school may be subject to state takeover.
Controversy Surrounding No Child Left Behind.
There has been plenty of controversy surrounding No Child Left Behind. Teachers, schools, educational organizations and even entire states have come forth and declared No Child Left Behind to be "flawed" and "ineffective" for various reasons. As reform of the law moves forward, debates about how to make NCLB more effective continue across the aisle and even among different schools and districts.
Money Concerns.
Perhaps the biggest controversy surrounding No Child Left Behind is the issue of adequate funding. While the intentions of No Child Left Behind may be laudable, if the funding isn't there to back it, the plan may become more of a burden than an aid. According to a study conducted by the National Association of State Boards of Education (NASBE), that appears to have been an early problem with the program.
The Study the NASBE conducted estimated that it would cost approximately $7 billion dollars over a seven year period for all of the states to develop and implement the testing programs outlined in No Child Left Behind. However, the No Child Left Behind budget only authorizes $400 million dollars to go towards helping the states design and implement the tests. According to the study, that would mean the schools would be responsible for footing a bill of more than $6 billion dollars.
The NASBE isn't the only educational organization raising eyebrows at No Child Left Behind. According to statements made by Becky Fleischauer, the spokeswoman for the National Education Association, in an interview with Education World, Fleishauer feels that the goals of No Child Left Behind are admirable, but the means to meet those goals just aren't there. The spokeswoman fails to see how the goals will be realized without complete federal funding since states are facing deficits and ongoing issues with budget cuts as it is.
Sacrificing One Subject for Another.
Another issue leading to the No Child Left Behind controversy is the fact that some teachers have felt pressured to focus on subjects rated by the No Child Left Behind testing requirements, rather than focusing on providing children with a well-rounded education. Some schools have been accused of cutting back on studies involving science and the arts to increase the focus on English and math. As a result, some complain education isn’t really improving; it just means sacrificing one subject proficiency for another. 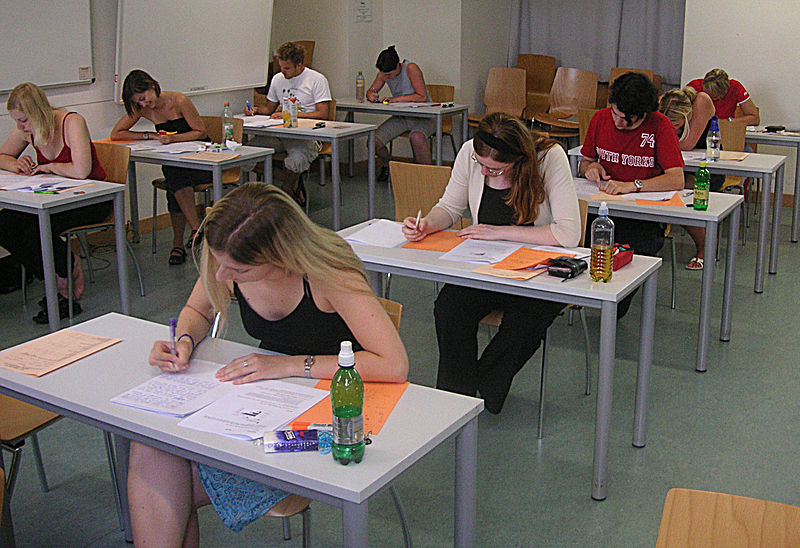 https://upload.wikimedia.org/wikipedia/commons/f/fe/MagnetSchool2.jpg
Magnet schools can provide students with specific skills that will help them towards a successful career. For instance, some magnet schools may focus on engineering while other magnet schools may focus on humanities. Because the enrollment eligibility for these schools isn't limited to geographic boundaries, they attract a diverse student population.
Some magnet schools operate as a "school within a school." This is because the actual "magnet school" program is held within a larger, comprehensive school.
Unlike charter schools, magnet schools are considered a part of the public school system. They operate under the same hierarchy and follow the same rules and regulations.
Under No Child Left Behind, President Bush has requested that $100 million be budgeted to enable school districts to establish new Magnet Schools. As of today, more than 150,000 students have benefited from this program.
Evaluating Schools.
If you are thinking of moving or if you want to know how your child's school ranks compared to other schools in your area, you need to know where to turn to get information on a school's No Child Left Behind compliance and progress.
Organizations called Parent Information and Resource Centers (PIRCs) work to inform parents on the ratings and progress of different schools in their area. There are currently more than 80 PIRCs in the country providing this service. To find the PIRC in charge of your school district, visit the PIRC website at www.pirc-info.net/pircs.asp.
Once you are at that website, you will be able to perform a search by state. The search results will provide you with the contact information of the PIRC responsible for the area in which you live or the area you are interested in moving to. That PIRC will be able to provide you with the information you need in regards to your school's compliance with No Child Left Behind.
Reform Efforts
Twelve years into the No Child Left Behind experiment, reform still seems to be a distant goal. The mandate expired in 2007, but Congress has yet to come to an agreement on how to rewrite the law. Until the new law was in place, schools were required to continue to abide by the original terms of NCLB. By 2011, Congress still hadn’t passed new education reform, and President Barack Obama took action.
Many schools across the country faced the new proficiency requirements for the 2013-2014 school year, knowing they would not be able to report 100% proficiency for their students. The Obama Administration gave schools another option – abide by certain reforms like including student test scores for teacher evaluations and opt out of some of the NCLB requirements. Most schools jumped at the option, with 42 states currently holding waivers for NCLB exemption.
It appears that waivers will continue indefinitely since Congress does not appear any closer to coming to an agreement on reform for NCLB. Many expect the waivers to continue until the end of the Obama Administration. At that point, it will be anyone’s guess as to how the next administration will tackle education reform.
Questions@ Contact us on Twitter. @publicschoolreview

The Impact of Coronavirus on Public Schools

Can Your Child’s School Meet the National Standards?
Recent Articles
January 20, 2021
Public Technical High Schools: Are They Really Preparing Students for Work After Graduation?
Learn about why technical public high schools are earning attention for their unique career-training opportunities.
January 20, 2021
Montessori Education: Does it Work in Public Schools?
In light of an upcoming study on Montessori education in South Carolina, as well as the growing popularity of the Montessori Method in public charter schools, we’ll take a look at the principles behind Montessori education and whether it is an effective method for preparing some students for the professional world or higher education.
January 20, 2021
Do Public Schools Need to Teach More Math and Science?
Some educators and community leaders are pushing for more math and science at the high school level. Is the move really necessary and if so, how do schools get students more interested in these STEM subjects?

Education reform is in the works, and you can stay updated on the latest changes, debates, and policies here. Learn more about No Child Left Behind and how it impacts your child. Explore how federal and state government is working to improve school performance, student achievement and education standards.