White Students are Now the Minority in U.S. Public Schools

by Grace Chen
Increasing birth rates among immigrant families from Asia and Central and South America, combined with lower birth rates among white families, means that for the first time in history, public school students in the United States are majority-minority. This shift in demographics poses difficulties for schools as they work to accommodate children of varying language abilities and socio-economic backgrounds.
It has been an ongoing trend for nearly two decades – while the total number of students in American public schools has risen, the percentage of those students who are white has steadily fallen. According to the Pew Research Center, in 1997, over 63 percent of the 46.1 million U.S. public school students were white. Today, white students comprise just 49.7 percent of the 50 million students enrolled.
These changes in the racial make-up of the nation’s public schools are reflective of where the overall population is headed. According to recent estimates by the U.S. Census Bureau, by 2060, the white population in this country is projected to fall by more than 20 million people, while the Hispanic population is set to double. Black and Asian populations are expected to increase as well, although at rates far slower than Hispanics. By 2043, the nation as a whole is projected to become majority-minority.

Public School Diversity
While the white student population has declined by 15 percent since 1997, according to Pew, both Hispanic and Asian populations have rapidly increased. In that same time frame, the number of Hispanic students has grown by 50 percent to 12.9 million students. The number of Asian students has also seen significant growth, jumping 46 percent to 2.9 million students. The African-American student population, which this fall will number 7.7 million, has remained relatively steady over the last twenty years.
Much has been made recently of the number of migrant children entering the country and enrolling in public school, but it is actually U.S.-born children of immigrants that account for the explosive growth of the minority student population. The Pew Research Center notes that between 1997 and 2013, the number of U.S.-born Asians increased by 50 percent, while the number of Asian immigrants during that time grew by just 9 percent. Among U.S.-born Hispanics, the number of children between the ages of 5 and 17 jumped by a whopping 98 percent between 1997 and 2013, while immigrant children of the same age actually declined by more than one quarter over the same time period.
Over half of students in pre-K through the eighth grade are from a minority group, while 48 percent of high school-aged students are minorities. However, the impact of increased minority enrollment is most salient at the elementary school level. Hispanic children alone account for a large portion of minority students, comprising at least 20 percent of kindergarten classes in 17 states, up from just eight states a little more than a decade ago. This growth is seen in states where large Hispanic populations reside, such as California and Florida. But Hispanics now account for more than 20 percent of kindergarteners in states like Idaho and Massachusetts, which have relatively low overall Hispanic populations. What’s more, in some states, including Oregon and Kansas, Hispanic children account for more than one-quarter of all kindergarten students. The ethnic and cultural shift of American public schools is occurring in every corner of the nation, in both rural and urban districts large and small.
Increased Need for English Language Learner Classes
The rapidly increasing number of children whose native language is not English necessitates the development of more robust English language learner courses, particularly at the elementary school level. According to the Federal Interagency Forum on Child and Family Statistics, nearly one-quarter of all children in the United States have a foreign born parent. As a result, more than one-fourth of American children are now bilingual. However, because many children who are immigrants or whose parents are immigrants speak a language other than English at home, a full 70 percent will require some level of English language instruction in school. Those programs require a lot of funding for qualified teachers, extra courses after school and during summer breaks, and for teaching materials.
Interestingly, while many Americans might assume that the greatest need for English-language learner courses is among Spanish-speaking populations, it is actually Asian students who will need the most instruction. Although Hispanic children far outnumber Asian children in American public schools, a greater number of Hispanic children are U.S.-born and have at least some English-speaking abilities. By contrast, the majority of growth among the U.S. Asian population is due to immigration, so children from the East arrive in U.S. public schools with little or no English language skills. Some school districts, particularly those in rural areas, have encountered difficulty finding qualified personnel who speak Asian languages.
Factors Negatively Impacting Minority Student Achievement
According to a report by The Atlantic, public schools will see 33 percent more Hispanic students, 44 percent more multi-racial students, and 2 percent more African-American students by the 2022-2023 school year. While this increased diversity presents many opportunities for positive growth, including increased social awareness and cultural understanding, it also presents some problems for public schools and children of color. Minority children, particularly those in the African-American and Hispanic communities, face a disproportionate lack of good schools and safe communities. More frequent incidents of violence, increased poverty, lack of access to healthcare, and substandard housing are just a few of the obstacles children of color typically encounter. 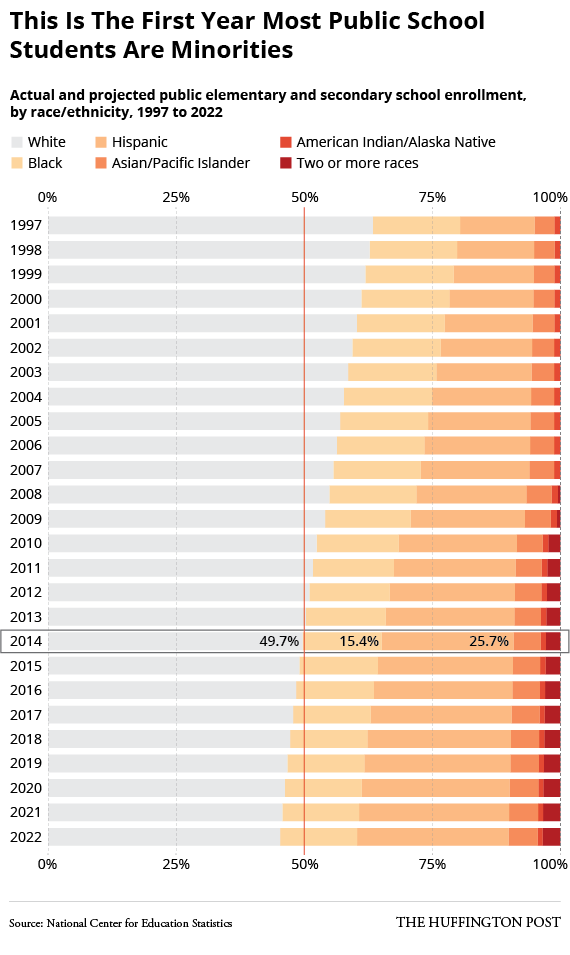