Changing Demographics Will Alter the Diversity of Public Schools

by Grace Chen
Learn about projected changes in public school enrollment of various ethnic groups and what problems may be ahead for state education systems as they try to cope with increasing financial demands as a result of increased enrollment.
Over the last 60 years, American public schools have become more and more diverse, with various ethnic and racial groups comprising a significant percentage of total enrollment. However, according to new data released by the National Center for Education Statistics (NCES), the diversity of public schools in this nation will change drastically over the next decade or so, and appear much differently in 2022 than it does today.
The Numbers
The number of white students enrolled in public schools has been falling for years. According to the NCES, between 2000 and 2010 white enrollment decreased from 61 percent to 52 percent of the total public school population. At the same time, the number of Hispanic students increased from 16 percent to 23 percent of total enrollment. This was a trend seen throughout the country over that timespan, with schools in the South and the West seeing the largest Hispanic enrollment increases of any region. 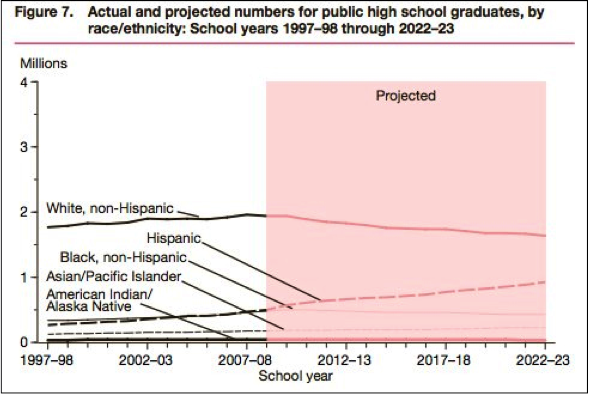 Graph from Huffington Post
The 2014 data released by the NCES shows that this trend has continued since 2010, and will continue for the foreseeable future. Through the 2022-2023 school year, the number of white students graduating is projected to decline by another 16 percent. A 14 percent decrease in the number of black students and a 29 percent decrease in the number of American Indian and Alaskan Native students that graduate from public high schools is expected as well. Conversely, other minority groups are expected to show significant growth in the number of students who graduate. It is estimated that the number of Asian and Pacific Islander graduates will increase by 23 percent, while the number of Hispanic students who graduate is projected to increase by an incredible 64 percent.
Areas of Growth
The NCES study reveals that the majority of growth in minority enrollment will occur in the South and the West – areas that have seen significant gains in Hispanic and Asian populations over the last twenty years. It stands to reason then, that with an increase in the number of Hispanic and Asian families in these regions that the number of Hispanic and Asian students would also rise. Additionally, Hispanics and Asians are the fastest growing segments of the U.S. population, with 2.2 and 2.9 percent annual growth in 2012 respectively. This further points toward continued increases in enrollment numbers and graduation rates for children of Hispanic or Asian descent.
Potential Problems Lie Ahead
Schools in the South and the West are growing rapidly, yet according to Education Week, schools in these areas, on average, spend less per pupil on education. For example, Arizona, which has seen explosive population growth since the early 1990s, spends just under $8,000 per pupil, which ranks 46th in the country. Another state that has seen rapid growth, Texas, spends $8,800 per pupil, which ranks 41st in the nation. Other states in the South and West, such as Nevada, Alabama, Mississippi, and Florida all rank in the bottom fifteen in terms of per-pupil spending. With increasing numbers of students entering schools in already cash-strapped areas, per-pupil spending is in danger of remaining stagnant or even dropping in these areas. 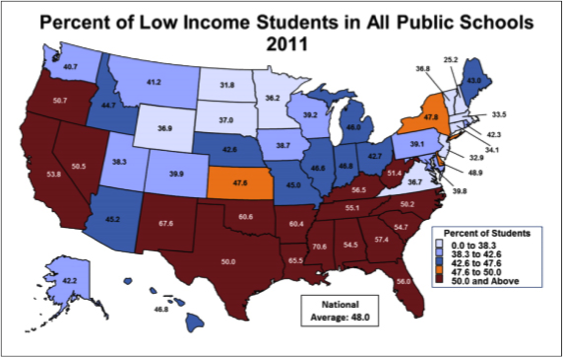 Graph from Southern Education
Compounding the issue is that some states that have low per-pupil spending also have some of the highest rates of low-income students. As of 2011, 50 percent of Texas schoolchildren qualified for free or reduced lunches. In Nevada, that figure stood at 51 percent, and in Florida 56 percent of students come from low-income families. In fact, thirteen of the fifteen states with the highest percentage of low-income students are in the South and the West – the same areas set to see astonishing growth in minority student populations.
According to data from the U.S. Department of Education’s Office for Civil Rights, incredible inequalities in access to education for minority students already exist in schools throughout the nation:
An influx of more minority students into the American public school system may very well exacerbate these existing educational inequalities. Unfortunately, the success of students in public schools is dependent in part on the amount of funding schools receive. Western and Southern states already must increase per-pupil spending just to keep spending flat. But with tens of thousands of new students on the horizon, funding for public schools in these areas will have to drastically change if inequalities in education are to be addressed.
Additional Resources [+]
comments powered by Disqus
School Safety: Shootings
Teachers and parents must be prepared for anything that impacts the safety of our young people.
What are the Top High Schools in Boston?
We review recent rankings from Boston Magazine that shows the top-rated high schools in this extensive school district.
An Overview of the Funding of Public Schools
Learn about how public schools are funded today and how the federal and local monies are allocated.
The Pros and Cons of Mandatory Gym Class in Public Schools
What are the Benefits of Public School Over Homeschooling?
Who Oversees Public Schools?
Longer Lunches, Smarter Students? The Controversy of 10 Minute or 1 Hour Lunch Periods
Understanding Self-Contained Classrooms in Public Schools
Should Your Child Go to College Right After High School?
Changing Demographics Will Alter the Diversity of Public Schools
How Well Do Single-Sex Schools Really Work?
Charter Schools vs. Traditional Public Schools: Which One is Under-Performing?
10 Characteristics of the Gifted Child
Why Peanuts are Being Banned at Public Schools
White Students are Now the Minority in U.S. Public Schools
Expired Food Served in Public School Cafeterias
Public School Gardens: Good for Learning or a Waste of Time?
Autistic Children and Public Schools
New Study Shows Vending Machine Laws Yield Positive Health Results in Schools
Do Mandatory Vaccines Hurt or Help Public School Children?
Tuition for Public Schools? Some Districts are Saying Yes
The Rising Popularity of STEM: A Crossroads in Public Education or a Passing Trend?
When Public Schools Fail Special Education Students: What Parents Can Do
All-Girl Public High Schools: Improving Confidence and College Success
Charter Schools Produce More Graduates than Public Schools
Healthy Cafeteria Options for Public School Students
The Hidden Costs of Public Education
Montessori Education: Does it Work in Public Schools?
Eliminating Processed Foods in Public School Cafeterias: The New Trend
Public School Supplies
Price of a School Lunch on the Rise Nationwide
Gifted Children in Public Schools
Why Parents are Choosing Montessori Charter Public Schools
Do Public Schools Have Tap Water Safe to Drink?
Banning Sports Drinks
Banning Bake Sales: The Controversy Behind Cupcakes, Brownies, and Cookies
How Much E. Coli is in Public School Lunches?
How to Choose a Public School for Your Child
Head in the Clouds: Why Public Schools are Embracing Cloud Computing
How Waiting for Supermans' KIPP Charter Schools Have Actually Been Successful
How Has the Pandemic Changed Public School?
Cyber-Education Coming to the Public School Realm
Going Global: The Attraction of the International Baccalaureate Program
Is Your Child’s School Forcing Kids to Diet?
Vending Vicious Cycles: The Overhaul of Public Schools' Vending Machines
What is an Online High School
Free Breakfasts at Public Schools
“Smart Snacks” Standards Coming to School Vending Machines Nationwide
Enrollment in Texas Public Schools Skyrockets
New York City School Going Vegetarian: Will Other Schools Follow?
Is Your Gifted Student Being Supported in Public School?
A School Run by Students? Massachusetts High School Embraces New Model
Charter Schools: Inspired by Quakers?
New Report Card Out for Charter Schools
Department of Education Supports Rights of Gay-Straight Student Support Groups at Public Schools
4 Ways You Can Encourage Your Gifted Child’s Progress Outside of School
Sugary Cereals Get Poured Out at Public Schools
How Will Obama's Stimulus Plan Impact Public Schools and Low Income Families?
Hebrew-Immersion Public Charter Schools: Ken or Lo?
Getting Your Kids Emotionally and Mentally Ready to Go Back to School
All-Boys School to Open in Newark this Fall
New USDA Lunch Guidelines Mean Healthier Fare
How to Protect Special Education Students from Campus Violence
Fuel Up to Play 60 Focuses on Integrating Fitness and Wellness into the School Day
New Nebraska Report Shows Minority Students Lag Behind in Core Subjects
6 Tips on Transitioning Back to School
STEM Schools: Bringing Technology and Engineering to the Classroom
The Right Kind of Universal Pre-K
Bed Bugs in Schools? The Creepy Truth
The Best Resources for Homeschool Lessons
Does Your Public School have an iPhone App?
Foreign Language Study Abroad
Radon Exposure in Public Schools: Are Your Kids in Danger?
Whooping Cough: Should Vaccinations be Required for Public School Enrollment?
Measles in School: A Parent’s Guide in 2015
How Well is Your School Prepared to Handle the H1N1?
More Articles
Read more articles (73)
Collapse List
10 Reasons Why High School Sports Benefit Students
Public School vs. Private School
Top School Listings by Category
The 15 Biggest Failures of the American Public Education System
Should Public Schools Ban Cell Phones?