Knowledge is Power Program: A Strong Model for Public Schools

by Grace Chen
As many traditional public schools struggle to close the achievement gap, Knowledge is Power Program schools seem to have the right formula for helping poverty-stricken and minority students achieve success. In this article, we examine how KIPP schools are making their students’ futures much brighter.
Knowledge is power. It is a phrase that countless schoolchildren have heard from the lips of countless teachers through the years. While for some it’s just meaningless words, for others it is a mantra by which they approach education. The Knowledge is Power Program (KIPP) takes that mantra to heart, and after 20 years, has changed the manner in which public school children are taught.
KIPP began as the brainchild of two Teach for America workers in 1994. After recognizing that their low-income students were not receiving the support they needed in order to achieve success in school, and later in life, Dave Levin and Mike Feinberg devised a new way to teach middle school students. After convincing the Houston Independent School District to green light their experimental program, Levin and Feinberg built a curriculum that harnessed the power of values held dear by their community – hard work, accountability, high expectations, and a sense of togetherness. From their initial class of 47 students, KIPP has since grown into a network of 162 schools across the nation.
KIPP In a Nutshell
KIPP was formed in order to bring opportunity to underserved populations through education. KIPP schools, which are public charter schools, are founded on the belief that any child – regardless of his or her socioeconomic status, racial heritage, or other demographic factors – can and will learn if given the appropriate opportunity. And with that opportunity, poverty-stricken children can develop the knowledge and skills they need to graduate from high school, go to college, and free themselves from the cycle of poverty that so often entrenches urban and minority families.
KIPP schools are founded on five essential principles that guide and direct the daily functioning of each student and staff member:
By adhering to the five pillars, KIPP schools have managed to do something that mainstream public schools struggle to do: Demonstrate achievement with poor and minority students. According to KIPP, of their 58,000 students in 20 states and Washington, D.C., nearly 90 percent are poverty-stricken and qualify for the free and reduced lunch program. What’s more, 95 percent are Latino of African-American. Many more students come to KIPP having a poor academic record or conduct issues at their prior school, and a growing number of students speak English as a second language.
Positive Results
Despite the economic and social disadvantages the majority of KIPP’s students live with each day, they are showing marked improvement in their academic achievement. Over 93 percent of students who attend a KIPP middle school graduate from high school. Compare that to a national graduation rate of 81 percent. The disparity is even more staggering when graduation rates are examined based on ethnicity. Just 76 percent of Latino students and 66 percent of African-American students graduate from high school nationwide. 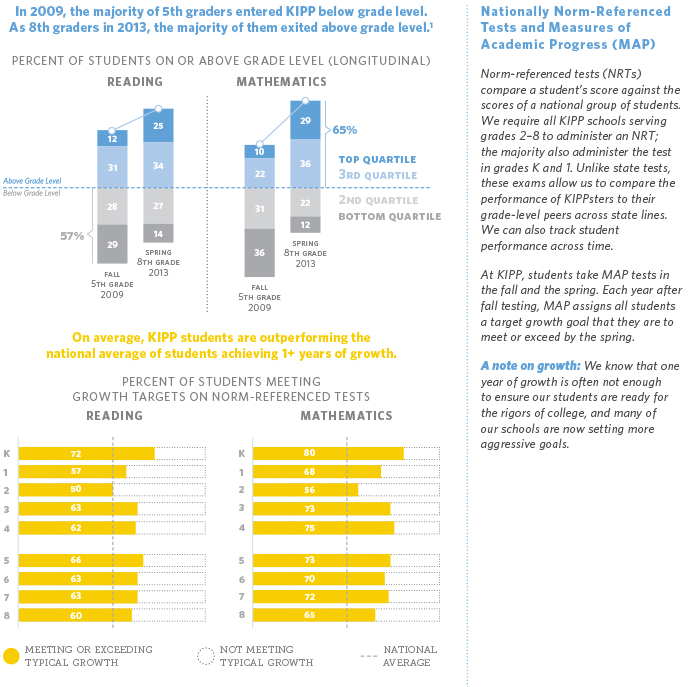 Source: KIPP
Performance on standardized measures of reading and math skills support the KIPP model. In 2009, 57 percent of children entering the fifth grade in KIPP schools had below grade level reading abilities. Even more – 67 percent – showed below grade level abilities in math. However, by their eighth grade year, these students were able to turn things around: 59 percent were above grade level in reading and 65 percent were above grade level in math. Additionally, 93 percent of KIPP students outperform their peers at other local public schools on measures of reading and 89 percent do so in math. In fact, a study by Mathematica shows that after three years at KIPP, students have 11 more months of math knowledge than their peers. KIPP schools have demonstrated an exceptional retention rate as well. Nearly 90 percent of students come back year after year or complete the highest grade level at their school. 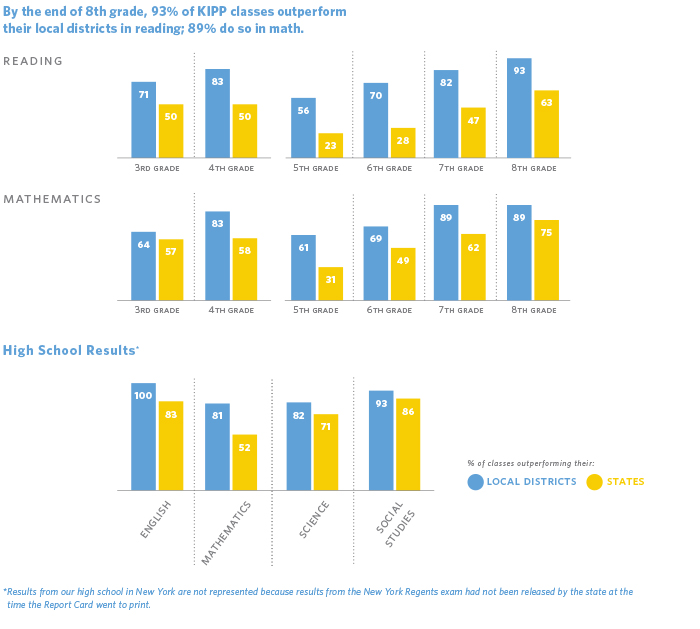